GST (Goods and Services Tax), is an Indian indirect tax that has been implemented to replace a number of earlier indirect taxes like service tax, excise duty, and VAT. The GST was passed in a Parliamentary bill on March 29, 2017 and finally came into effect on July 1st, 2017.
The Gods and Services Tax is imposed on the supply of goods and services. It is the solitary domestic indirect tax law for the whole nation.

GST has several benefits across government, states, consumers, and trade and industry, such as price reduction of goods and commodities, accelerated process of various activities, and a lowering of corruption. The various advantages are given in detail.

Benefits to Trade and Industry

* Power to tax services is resulting in increased returns.

CGST: This tax is collected by the Central Government on an intra-state sale (e.g., a transaction happening inside Haryana)

SGST: This tax is collected by the state government on an intra-state sale (e.g., a transaction happening inside Haryana)

IGST: This tax is collected by the Central Government for an inter-state sale (e.g., Haryana to Uttar Pradesh)

In the earlier tax structure, each purchaser, including the last customer had to pay tax on every tax. This pre-requisite of tax on tax is defined as the cascading effect of taxes. The introduction of GST helped in the removal of this cascading effect, and here the tax is calculated just on the value-addition at every phase of ownership transfer.

GST has brought numerous new changes such as online filing of the GST returns. The other new changes are mentioned as follows:

Through the implementation of ‘e-Way bills’, GST has launched a centralized system of waybills for inter-state goods movement. From April 15, 2018, there has been an introduction of waybills for intra-state goods movement. Through this system transporters, traders, and manufacturers could easily generate a single e-way bill for the transportation of goods from the place of origin to the final destination on a common online platform. This system also benefits the tax authorities as their check-posts time is reduced and they have to deal with lesser tax evasion.

In January 2020, there has been a trial launch of the e-invoicing system, which finally got implemented from October 2020 onwards. Under this new system, big-sized businesses with yearly returns of over Rs.100 crore are required to comply with certain requirements. For example, businesses are needed to obtain a unique invoice reference number for each instance of business-to-business invoice by uploading these invoices on the GSTN’s portal termed as the invoice registration portal for the verification of authenticity and correctness of the invoice. Once verified, the invoice gets accepted through a QR code and a digital signature.

This system permits interoperability of invoices and aids in the reduction of data entry mistakes. The portal is developed is such a fashion that it passes invoice information directly from the IRP to the GST and the e-way bill portal. Hence, the need for manual data entry in the course of ANX-1/GST returns filing and the generation of part-A of the e-way bills is removed.

Different items have different rates of GST on them. For example, the GST on washing detergents is 28% while those on soaps is 18%. Similarly, we find that GST on movie tickets is based on slabs, where tickets in the range of Rs.100 or less are charges 18% GST, and those more than Rs. 100 are charges 28%. Vehicles, both private and commercial are charges 28% GST, whereas readymade clothes are charges 5%. If you buy an under-construction property then you will have to pay a GST of 12%. However, certain products and industries are exempted from the GST, like dairy products, meat products, fruits and vegetables, products of milling industries, and other groceries and essential items.

GST has introduced a system named Reverse Charge Mechanism (RCM) where the receiver is payable for the tax on the behalf of unregistered, smaller material and service suppliers. Here, the unregistered dealer is not eligible for Input Tax Credit which must be paid by the receiver. 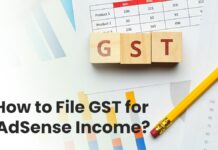 How to File GST for AdSense Income? 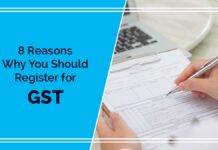 8 Reasons Why You Should Register for GST